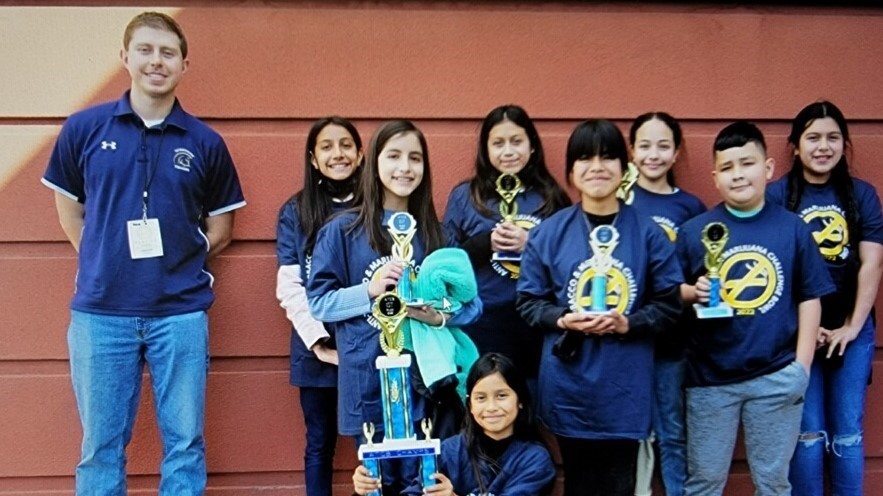 This year's Anti-Tobacco Bowl team was composed of an amazing group of 6th graders, many of which joined the team a short time before the competition against other schools from Tulare County. However, each of these students stepped up to the plate and showed what a Sunnyside team can achieve. From the days leading up to the competition, to only minutes before competing each round, every student aimed to do their best by studying and quizzing one another during multiple recess, lunch, and other break times. These students continued to show dedication to their team by being flexible team players, allowing every teammate a chance to compete. Initially, those who competed were on two different teams! Originally Sunnyside CHOICES and Mr. Kimball's team were to compete separately, and even against each other. However, due to some unforeseen circumstances, both teams combined into one, competing on that day as one team of 8. This sudden change didn't stand a chance against the adaptive and positive Sunnyside students! Every student recognized that only 5 could compete at a time, and that the remaining 3 would have to wait their turn to compete in the next round (assuming that previous round won!). With belief in each other, constant peer leadership before and during the event, whole-team encouragement, and self-determination, the Sunnyside Team won all of their match ups in this Tulare County inter-school challenge, with16 other schools competing! I could not be more proud of the 8 sixth-graders who demonstrated their knowledge about the dangers of smoking, and how to live a healthy life. While this memory of a competitive victory against other Tulare County schools, along with a new trophy for Sunnyside, is an amazing achievement, the best part of this event is how the students will use the knowledge they have gained to continuously impact their own, and their peers' lives in continuing to be Anti-Tobacco and Marijuana.

Congratulations to the entire Sunnyside Team, and I am so very proud of you all!